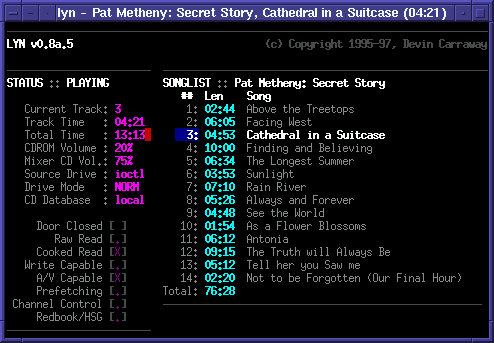 I hate this page. Every time I look at it it's either gotten embarassing or out of date, or in most instances poth. My musical tastes are wretched by most enlightened standards -- the best that can be said for them is that they're pretty varied (jazz, rock, new-agey, violent heavy metal, e.g.). The worst is probably that they're monotonous and underappreciative.

Part of the trouble in this issue is my level of irritation with the American music industry, which expends vast amounts of money and resources to create public hysteria over miserably uncreative pop stars, then abandons them to their questionable artistic merits when the parabolic curve of their money-generating potential heads downward again. Likewise the broadcast radio industry, which accomplishes much the same aims by playing a dull repetitive hash of stuff that market research has demonstrated will go over well with the maximumal number of people, and thereby provide the greatest possible audience to their advertisers. Likewise the "music journalism" industry, who to judge from their advertising content, are in the business of selling overpriced ugly clothing, mixed drinks and consumer electronics rather than that of making aesthetic commentary and recommendations.

My inclination to purchase music has headed steadily downhill of late, starting right about the time that the Recording Industry Association of America, representing the Big-N Music Companies (where N is an integer less than five and decreasing over time), started suing anyone they could find to try to stop MP3 from becoming a successful standard. It had nothing to do with money -- most evidence is that they make more, rather than less, due to digital availability of music -- but a lot to do with control and power, the acquisitions of which are a major obsession in the media industry, and indeed any industry dominated by a few immensely wealthy interlocking companies.


Note from the future: I wrote that paragraph before the RIAA vs. Napster case, when Napster was in its infancy and a very small portion of the individual net users had enough bandwidth to participate.


You are in a maze of twisting passages, all alike.
This one went to market, this one stayed home.